Since 1948, the Walker family name has become synonymous with quality family dining. The family has since perfected its reputation for outstanding gourmet pancakes and breakfasts. Our story begins when Victor and Everett Walker began opening snack shops in Evanston, IL. In 1960, they opened Walker Bros. Original Pancake House in Wilmette, IL. In 1981, Ray Walker and Richard Walker Sr., sons of Victor, opened Walker Bros Original Pancake House in Glenview, IL. In 1989, Richard Walker Sr. ventured out on his own and opened Richard Walker’s Pancake House in Schaumburg, IL. In 1996, Richard Sr. opened a second location in Crystal Lake, IL. In 2006, Richard Sr. relocated to San Diego and opened the third location in downtown San Diego, CA and recently La Jolla, CA. In 2014, Chad Wamsley took ownership of the Richard Walker’s Schaumburg location with plans to expand and update the space while maintaining the Walker family name, recipes and quality.

Richard Walker’s Pancake House continues the Walker family tradition embracing a menu with a multitude of choices and unbeatable service. Our recipes demand only the finest ingredients: USDA 93-score butter, pure whipping cream, the freshest grade AA eggs, and hard wheat unbleached flour. We import our sweetest lingonberries from Sweden and our Havarti cheese from Denmark — while sourcing all of our fresh produce locally where available. Our bacon, sausages, hickory smoked ham, and Canadian bacon are custom made for our use only. All of our batters are made fresh on the premises so you can you be assured you are enjoying the finest breakfast creations possible.

Over the years, Richard Walkers’s Pancake House has received many accolades both in Chicagoland and California. We were voted “Best Breakfast” by the Reader’s Choice Awards in the Northwest Herald. We were given the “Top 5 Breakfast” award by the USA Today. And as seen on NBC television in Chicago, we were voted “Best of the Best”.

From our entire staff and family legacy of over 65 years, we thank you for choosing Richard Walker’s Pancake House – Schaumburg to enjoy a breakfast experience unlike any other.

What’s Up With the Rabbit? 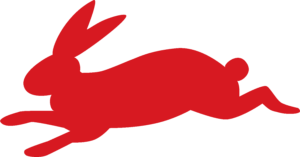 Symbolically, the Rabbit indicates comfort, abundance and family. For this, Richard Walker’s Pancake House has chosen the Rabbit to indicate our warmest gesture of “Welcome Home.” We hope that any time you see the Richard Walker’s Rabbit you find the symbol as comforting as we do. 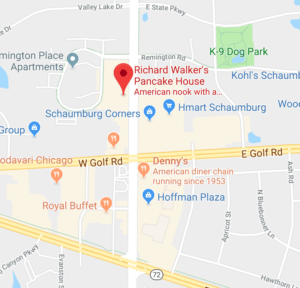